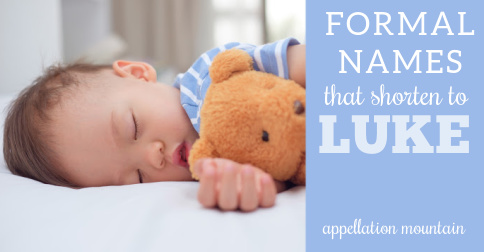 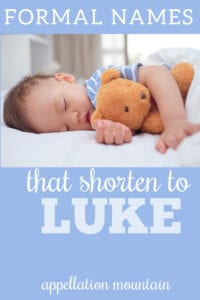 Luke names range from the obvious Lucas to the wait-this-could-work Ludovic.

If you love Luke, but love the option of a formal name, this list is for you.

No question that Luke is complete and whole on its own.

Not only is he a major figure in the New Testament, but there’s Cool Hand Luke and Star Wars’ Luke Skywalker. From athletes and artists to musicians and politicians, it is tough to list all of the many accomplished Lukes.

Their number is sure to increase, too. Luke has ranked in the US boys’ Top 100 since 1992, and he currently sits at #31 – near an all-time high. The name is similarly popular throughout the English-speaking world.

But let’s say that you prefer a longer name for your son. Maybe your last name is super-short, or maybe you’re just into longer given names.

That’s where the Luke names come in.

BEGINNING WITH LUC or LUK

Chances are that most parents who opt for Luca aren’t going to shorten it.  But you could – and if you’re ambivalent about a boys’ name ending with ‘a’, the presence of the rock solid Luke as a possible short form might feel like a safety net.

Ancient Roman poet Marcus Annaeus Lucanus was better known as Lucan.  He was BFFs with Emperor Nero until the pair quarreled and things ended badly for the poet. Perhaps that’s part of the reason little of his poetry survives.  There’s also a Knight of the Round Table in Arthurian legend called Lucan, too. Despite being rare – just 15 boys received the name in 2020 – Lucan would fit right in, somewhere between the very popular Luke and other familiar names like Logan.

The logical formal name for Luke, and a very popular choice, too.  At #8, Lucas outranks Luke in the US by quite a bit. Odds are that some of those boys named Lucas (and Lukas) are Luke at least some of the time.

A Spanish surname from luz – light, Lucero is also a celestial reference. Lucero del alba is the morning star.  The only trouble with getting Luke from Lucero is that the ‘c’ in Lucero makes an ‘s’ sound – LOO sehr oh. But it could work. While Lucero is unisex, the most famous bearer of the name is probably Mexican singer Lucero; she makes this name more familiar for girls.

With so many boys answering to Julian and Sebastian, the door seems open for Lucian and Lucien, too.

A Spanish and Italian cousin to Lucian.

Roman family name Lucianus can be found in ancient history, the name of a second century satirist and a fourth century martyr.

Yes, there’s the popular television series with a handsome – and redeemable, even heroic – character by the name. And yes, Lucifer is derived from lux – light. No question the sound is incredibly appealing and, as one of the Luke names, it’s a great example of a familiar nickname paired with an unconventional formal choice.

But all of that said, even if you’re not a person of faith, this is the kind of jaw-dropping pick that results in too much attention. For life. It’s likely to prove burdensome. Any of the other Luke names is almost certainly a better option.

The masculine equivalent of Lucia, with an equal number of possible pronunciations. There’s loo cho, the Italian; loo syo, in Spanish; and the more phonetic loo see oh. Emphasis varies, too.

Worn by many a distinguished ancient Roman, today Lucius is better known as the patriarch of the Malfoy clan in the Harry Potter universe. That makes him a villain, of course, thoroughly on the wrong side. But Lucius is no Lucifer. Plenty of other men of distinction have worn the name. One you might not immediately think of: in The Incredibles, Frozone’s real name is Lucius Best. With names like Atticus, Julius, and Cassius in the spotlight, why not Lucius?

Luco is the oh-so-rare flip side of Luca. It’s on the fringes, the name of a few minor fictional characters and sometimes a surname, too. But it’s every bit as fun to say as many of the other Luke names, and the o ending is so in favor right now, too.

LUKE NAMES: IN THE MIDDLE

Double names like John Luke are possibilities, but some of the most appealing choices are imports. Gianluca is the Italian equivalent of John Luke. Jean-Luc brings to mind Star Trek: The Next Generation, but it is a perfectly possible name.

First up: Alucio appears on lots of baby name sites … but it doesn’t seem to be used in the US. That said, it looks and sounds like it could easily be a name. And while it’s almost certainly pronounced with a soft ‘c’ sound, Alucio fits with the Luke names.

Technically, Ludovic is a form of Louis, via Ludwig. (It’s quite the family tree.) But scrunch up Ludovic and it easily contracts to LUdoviC. And Luc seems like a more fits-in nickname, perhaps, than Ludo.

Are there other Luke names that belong on this list? 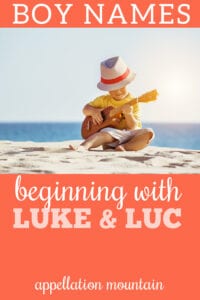