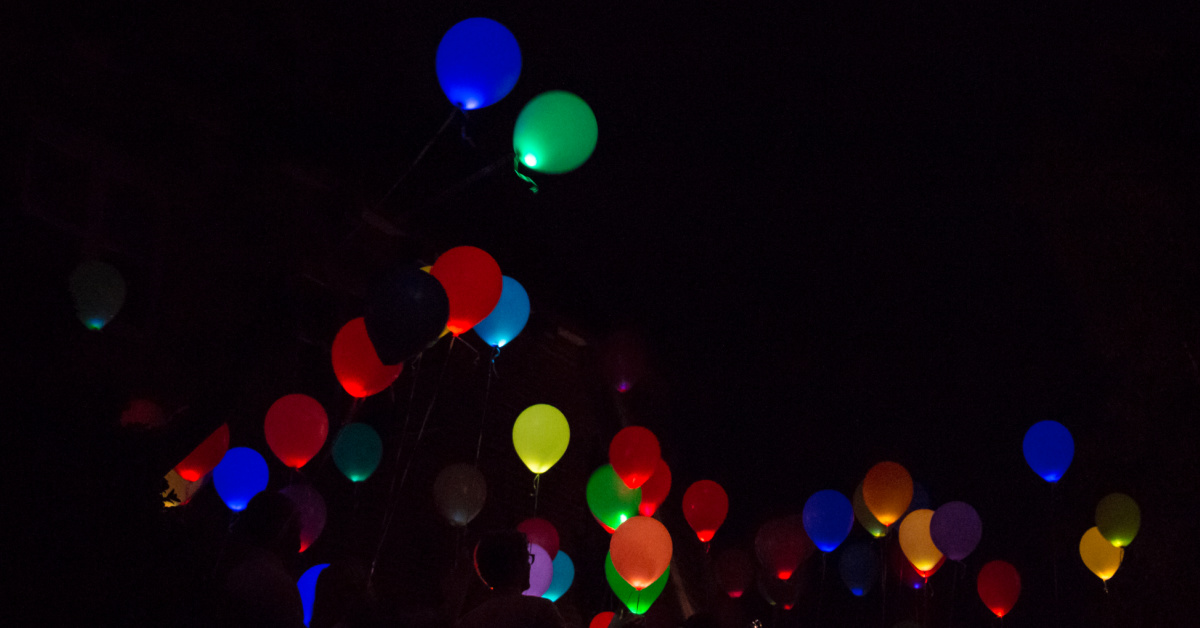 
We are adding two of our favorite things together: glow sticks and balloons because they belong together. Glow in the dark balloons are simple to make with this easy technique perfect for kids of all ages (obviously younger kids need supervision anytime you are using glow sticks or balloons!).

Let’s have some glow in the dark balloon fun…

Glow in the Dark Balloons

I recently went to the store to shop for party supplies.

One of the items I wanted was a bag of balloons.   I found the balloons but also discovered a fun new kind of balloon – LED balloons!

LED Glow in the Dark Balloons

They have a little light in them that is activated when you pull out the tab.

Then you blow them up like usual and they glow from inside.

I had to get some and the kids had a lot of fun with them.

Finding a Glow in the Dark Balloon Alternative

It seemed like a simple “why didn’t I think of that!” kind of concept so I wondered if I could re-create the idea on my own with some regular balloons and glow sticks.

First, have the kids crack all of the glow sticks and shake them as needed to get them glowing brightly.   I used the long skinny bracelet size sticks but the short stocky glow sticks would work well too.

We tried inserting the glow stick into the balloon before blowing it up.   While it did work, it was hard to blow up the balloon.   We found that it was easier to start with blowing up the balloon alone.

Once the balloon was inflated, my son wet the tip of the glow stick and wiggled it down into the balloon while holding the open end of the balloon tightly closed around the stick to keep the air from escaping.

Once the glow stick dropped down into the balloon, he tied off the balloon.

In a few balloons we even added two glow sticks to them to make them extra bright.

These glow balloons were not as bright as the LED balloons that I purchased.   However, they were much cheaper and my kids had so much fun with them.   They kicked them, played volleyball with them, and even jumped over them in some new game they made up.

Glow balloons would also make for a fun decoration at an evening party.

MORE GLOW IN THE DARK FUN FROM KIDS ACTIVITIES BLOG

How did your glow in the dark balloons turn out? Did you make them with glow sticks or did you buy them or created them with LED lights? Tell us below!